Despite years of treatment to prevent recurrence of skin cancer, Ian McDonell’s melanoma –a disease that killed his brother– spread to his brain and body. In 2017, he started an innovative immunotherapy treatment. A year later, all scans showed his cancer was gone.

Several years ago, Ian McDonell, a Staff Sergeant with the Ottawa Police and father of three had just lost his father to cancer and his brother was dying of melanoma. Ian’s wife insisted he see his physician to check out a mole on his back. It turned out to be an ulcerated nodular malignant melanoma – an aggressive form of skin cancer.

Ian had surgery to remove it along with a lymph node from his left groin. Several weeks later, he had a lymph node removed from his armpit. Following these surgeries, he had no signs of cancer, but due to his family’s history, Ian was at high risk for relapse.

Ian was feeling well, but during a standard monitoring visit in June 2017, his CT and MRI scans showed sobering news. He had half a dozen tumours in his groin and abdomen, and three more tumours metastasized to his brain. Ian’s cancer was stage 4.

Given the severity of the findings, Dr. Michel Ong at The Ottawa Hospital suggested an aggressive approach – a recently approved immunotherapy treatment.

“The idea of chemotherapy is to kill off cancer directly,” said Dr. Ong. “There are potential side effects, because chemotherapy tries to poison the cancer.

Ian started on a combination of two immunotherapies given intravenously in the chemotherapy unit at The Ottawa Hospital’s Cancer Centre. He also underwent CyberKnife radiotherapy treatment where high doses of radiation were directed at his brain tumours. He bravely continued with the second round of immunotherapy, but was so sick, he had to be taken off the treatment and started on steroid medications to slow down the immune system. Ian felt better, but his immunotherapy was on hold.

When Ian began to develop weakness in his face, he worried his cancer was getting worse. It wasn’t. Scans showed one tumour had shrunk from 25 to 10 mm, and another had shrunk from eight to four mm.

Dr. Ong recommended trying a single immunotherapy rather than two, and while the treatment made Ian very sick, it did the trick.

Two months later, the results of a PET scan, MRI, and a CT scan showed that he was tumour-free. All trace of his cancer was gone.

When Dr. Ong first met Ian in 2013, options for immunotherapy or targeted chemotherapy weren’t available. Thanks to incredible advances in immunotherapy, there is now hope.

“In the last few years, we’ve gone from having very poor options to having many effective options for melanoma. That’s because cancer therapy continues to develop at a very rapid pace,” said Dr. Ong. “We, at The Ottawa Hospital, are constantly participating in practice-changing clinical trials. The standard of care is constantly changing, as it should. We are continually trying to push the limits of cancer treatment.”

Hope for the future

Because of successful immunotherapy treatments, patients like Ian are now planning a future of living cancer-free.

“When the provincial exams for police services came up, I said, ‘I’m gonna write it, because I’ve got a bit of hope now.’” said Ian.

More importantly, in addition to his career plans, immunotherapy has allowed Ian to plan for the future with his family and a chance to watch his daughters grow up. 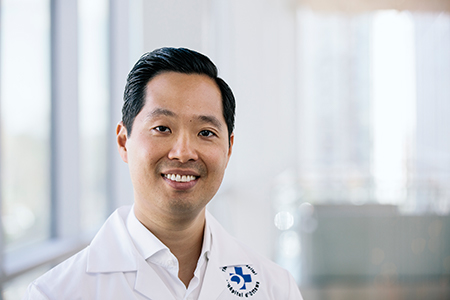 To support life-saving research at The Ottawa Hospital that helps patients like Ian, please donate.

Rare pheochromocytoma tumour gives young man the battle of his life
Bryde Fresque needed a skilled team to come up with a diagnosis of pheochromocytoma – a rare tumour that left his future uncertain.
Cancer, Donors, Patient Care, Research

Breast cancer patients benefit from Ottawa-based study
Ottawa study is changing the standard of care for breast cancer patients world-wide.
Cancer, Clinical Trials, Research
Sign up to receive updates on the transformational care taking place right here at our hospital, inspiring patient stories, and the latest research discoveries impacting healthcare for you, your loved ones, and our community.
This website uses cookies and other tracking tools to offer you a better experience. Disclaimer & Privacy Statement Accept
Privacy & Cookies Policy
Necessary Always Enabled