Parkinson Research at The Ottawa Hospital

Parkinson’s disease is the second most common neurodegenerative disease after Alzheimer’s, affecting at least 100,000 Canadians. Only through a better understanding of the basic mechanisms that cause it can effective treatments be developed.

Imagine not being able to control a trembling in your hands and limbs, the inability to speak loudly, losing your sense of smell, dealing with unexplained pains. Unfortunately, these are just a few of the symptoms affecting Parkinson’s disease patients every day.

More than 100,000 Canadians live with Parkinson’s, including 8,000 here in Ottawa. Parkinson’s is a progressive neurodegenerative disease that primarily affects voluntary, controlled movement. The exact cause of the disease is unknown. Discovered almost 200 years ago, there is still no cure or proven treatment available to slow its relentless progression. People can develop Parkinson’s disease at any time in their life.

“Our society will be faced with many more patients with Parkinson’s over the decades to come. In many ways Parkinson’s is complicated and also complex. I strongly believe that although it’s complex and complicated, we can solve that riddle. We have the expertise in Canada to make a major contribution to a cure for this disease.” – Dr. Michael Schlossmacher, Senior Scientist, The Ottawa Hospital Canada Research Chair in Parkinson Disease and Translational Neuroscience

In 2009, a group of investment advisors from the Ottawa financial community formed Partners Investing in Parkinson Research (PIPR). The group set an original goal of raising $500,000 in support of research to better understand and diagnose Parkinson’s. Since then, PIPR has expanded to include many individuals and families affected by Parkinson’s who are committed to supporting research, and has raised over $1.4 million.

Co-chaired by Andrew Frank of RBC Dominion Securities and Kim Teron of Teron Inc., PIPR members reach out to the community at large to raise vital funds to support leading edge Parkinson Research at The Ottawa Hospital.

PIPR has provided important base funding to the scientists, allowing them to leverage further grants. The advancements have been impressive. PIPR has not only helped to fund research for the treatment and cure of Parkinson’s disease, it has galvanized the community to support the cause that previously received little attention. Above all, the PIPR team has given hope to those who live with this unremitting disease.

“Parkinson’s Disease had already been part of our lives for over 20 years, so how could we not get involved? Raising funds for research was the obvious action, but fundraising at first seemed daunting. We soon learned that our family, friends, neighbours, and colleagues all wanted to help – they just needed to be asked. But our group has become more than fundraising – we have become an extended family, supporting each other as we faced many of the same challenges dealing with this disease as well as sharing all of the same fears and hopes.” – Bobbie Driscoll, PIPR co-founder

PIPR is always open to new members and encourages anyone interested to join! For more information, contact Erin Pickering at epickering@toh.ca

Learn more about PIPR and hear about some of the exciting research advancements on Episode 34 of Pulse, featuring Dr. Julianna Tomlinson and Kim Teron.

In 2021, team PIPR is aiming to raise $100,000 to support Parkinson’s Research at The Ottawa Hospital. Click on the button to learn more and support their efforts. 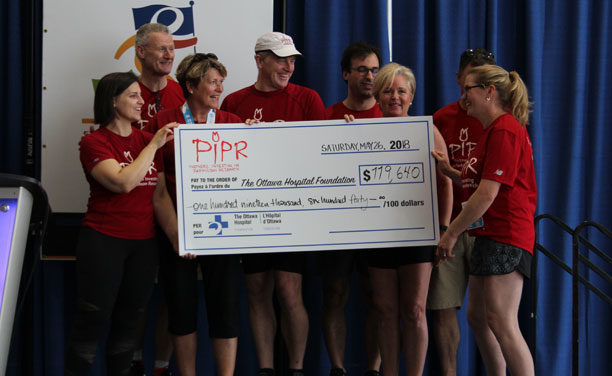 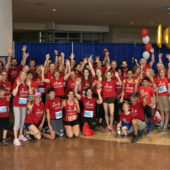 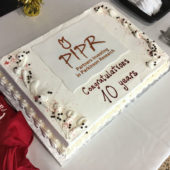 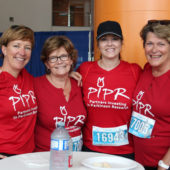 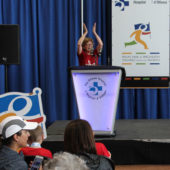 Parkinson Research at The Ottawa Hospital

Researchers at The Ottawa Hospital and the University of Ottawa came together in 2004 to form the Parkinson Research Consortium under the leadership of Dr. David Grimes and Dr. Michael Schlossmacher. The consortium brings together clinicians and scientists from various disciplines to improve our understanding of Parkinson’s disease, conduct novel and innovative research, and develop new treatment options, with the ultimate goal of developing a cure.

Support the ongoing research efforts by making an online donation, or by calling 613-761-4295. For more information about the research or how to join the team, contact Erin Pickering, Development Officer, Philanthropy, at 613-798-5555, ext. 13363, or epickering@toh.ca.

The Ottawa Hospital Foundation is raising money for research that is revolutionizing the care we provide patients.

3-D virtual reality helps neurosurgeon treat Parkinson’s
3-D virtual reality increases neurosurgeon’s accuracy to place electrodes in patients’ brains. Technology expected to be the first of its kind in the world.
Sign up to receive updates on the transformational care taking place right here at our hospital, inspiring patient stories, and the latest research discoveries impacting healthcare for you, your loved ones, and our community.
This website uses cookies and other tracking tools to offer you a better experience. Disclaimer & Privacy Statement Accept
Privacy & Cookies Policy