Four years after metastatic breast cancer diagnosis, every day is a gift

Jillian O’Connor was 18 weeks pregnant when she was diagnosed with breast cancer and given less than two years to live. In February, she celebrated the fourth birthday of her healthy baby boy and continues to live life to the fullest.

Jillian O’Connor lost her battle with cancer and passed away on September 30, 2019. The following story was written earlier this year as she bravely faced her diagnosis and lived each day with courage and hope.

“Jillian was a true champion of The Ottawa Hospital. She not only shared her story to encourage and inspire others, but she reminded us that every day is a gift to be cherished. Jillian’s enthusiasm for life and positivity in the face of adversity was evident as she poured herself into her family and continued to move forward with hope. We are deeply saddened by her loss and offer our most heartfelt condolences to her husband, her three children, extended family, and friends. All of us at the Foundation remain profoundly moved by her determination, strength, and bravery.”

— Tim Kluke, President and CEO of The Ottawa Hospital Foundation

Jillian O’Connor stands in her living room laughing. A small boy hugs her leg, then takes off and disappears down the stairs to play with his older brother and sister. That was Declan. He turned four on February 1, 2019. The fact that his mother saw him blow out the candles on his birthday cake is extraordinary.

When Jillian was 18 weeks pregnant with Declan, she was diagnosed with metastatic breast cancer. She wasn’t expected to celebrate his second birthday. Two and a half years later, Jillian celebrated his fourth birthday with him—and still living life to its fullest.

The first thing that strikes you about Jillian is her smile. Next, it’s her insatiable enthusiasm for life. Then comes her contagious positivity. Hard not to think the latter alone is why she has made it so far against daunting odds. It may be anecdotal but Jillian definitely thinks, or rather knows, it’s the key.

“I am totally full of cancer, pretty much from my head to my toes,” said Jillian. “Every day I get is a blessing, ‘Oh, I woke up. Perfect!’ You just want to go at it as hard as you can, for as long as you can. Just being optimistic, I think helps. I really believe it helps.”

Jillian’s petite frame belies her light-up-the-room personality. She is gregarious with an enthusiasm that bubbles infectiously out of her. She talks about her cancer matter-of-factly. It is part of her life, but doesn’t rule her. She has other things to focus on—her precious family. The 35-year-old laughs and chats so easily about her life and her journey with cancer that it takes a second to realize how extraordinary her journey has been.

In 2014, Jillian was still nursing Landon, her second child, when she went to see her physician about a blocked milk duct. It turned out to be breast cancer. Doctors wanted to do CT scans to determine the extent of her cancer, but Jillian couldn’t. She was 18 weeks pregnant. Without treatment, she was told she wouldn’t survive to give birth. It was unfathomable. She had a three-year-old daughter and a one-year-old son at home. It was a devastating diagnosis but Jillian met it head on with her own special brand of optimism and determination.

Terminating the pregnancy was not an option for Jillian and her husband David. Her oncologist, Dr. Mark Clemons, told her she didn’t have to. He could provide a chemotherapy cocktail that would keep her cancer at bay without harming her unborn child. Jillian had a mastectomy and a dozen chemo treatments tailored to her special case. On February 1, 2015, she gave birth to a healthy baby Declan.

“I received chemotherapy right up until I delivered him. He was healthy—a wonderful birth weight. He was absolutely perfect,” said Jillian.

After Declan was born, Jillian had scans to see where the cancer was. It had spread, and had metastasized to her bones, liver, and lymphatic system. That was when she was given less than two years.

“Basically, they said, ‘We can’t give you a long timeframe. It’s stage IV, so every day you wake up is going to be a gift,’” said Jillian, who stopped working as a nurse at the Queensway Carleton Hospital and became a patient there, receiving treatment at The Ottawa Hospital’s satellite cancer centre, the Irving Greenberg Family Cancer Centre. “Two years passed, then three, and then I passed four years this past summer. I’m hoping I’ll have another 40 plus years. I got a pretty doom and gloom diagnosis, but I continue to pull life off.”

Jillian has pulled life off in a big way. After all, when she brought Declan home from the hospital, she had three children under the age of three to look after. She poured herself into motherhood, enjoying every moment with them. Between weekly trips to the cancer centre for treatment, she was busy changing diapers, making meals, caring for, playing with, and loving her little ones.

Declan is back and clambers onto his mother’s knee—for about 30 seconds—before scrambling off onto the couch beside her. He is a typical four-year-old. His big sister Myla, who is seven, and brother Landon, who is five, appear, and the three play on the floor near their mom. Jillian chatters happily with them.

Jillian has celebrated all her children’s early-year milestones: learning to walk, talk, run, play, read, and become independent little people. Both Myla and Landon are now in school. Declan will be joining them in September. In mid-January, Jillian and David registered him for junior kindergarten. Nowadays, while the two older ones are in school, she and Declan have fun hanging out. They fill their days with activities that include volunteering at the school, as well as the more mundane household chores.

“I got a pretty doom and gloom diagnosis, but I continue to pull life off.”

Jillian is exuberant about life. She lives each day as it comes.

“She has, with all the help that modern radiotherapy and medical oncology can offer in Ottawa, in addition to her tremendous personality and drive, done amazingly well in a tragic situation for any young mom,” said Dr. Clemons. “At the same time, she has been involved in practice-changing research that is going to improve the care of patients—she continues to give.”

Over the past four years, Jillian has participated in clinical cancer trials with new therapies that have kept her cancer in check. When it spread to her brain a couple of years ago, she had whole-brain and CyberKnife radiation. Then she was put on new medication that can cross the blood brain barrier, which her regular chemotherapy couldn’t do. The medication halted new tumour growths in her brain. Her cancer is not getting better, but it’s not getting worse, either.

“I’m happy to stay status quo, because there is nothing I want to do that I can’t do right now,” said Jillian.“Status quo—I’m good with that. I feel great. I don’t have aches or pains or anything. I don’t have time to think about how I feel.”

Jillian sits on the floor laughing and playing with her three children. She looks at the little doll her daughter Myla shows her, and hands a ball to Landon. “I really think it’s the kids. They have so much to do with it, because they are so great. They are so fun. They keep me really busy and that’s half the fun. By the time I go to bed at night, I don’t think about cancer. I don’t think about tests coming up. I don’t think about that stuff because I’m too tired. So I think that is helpful.” 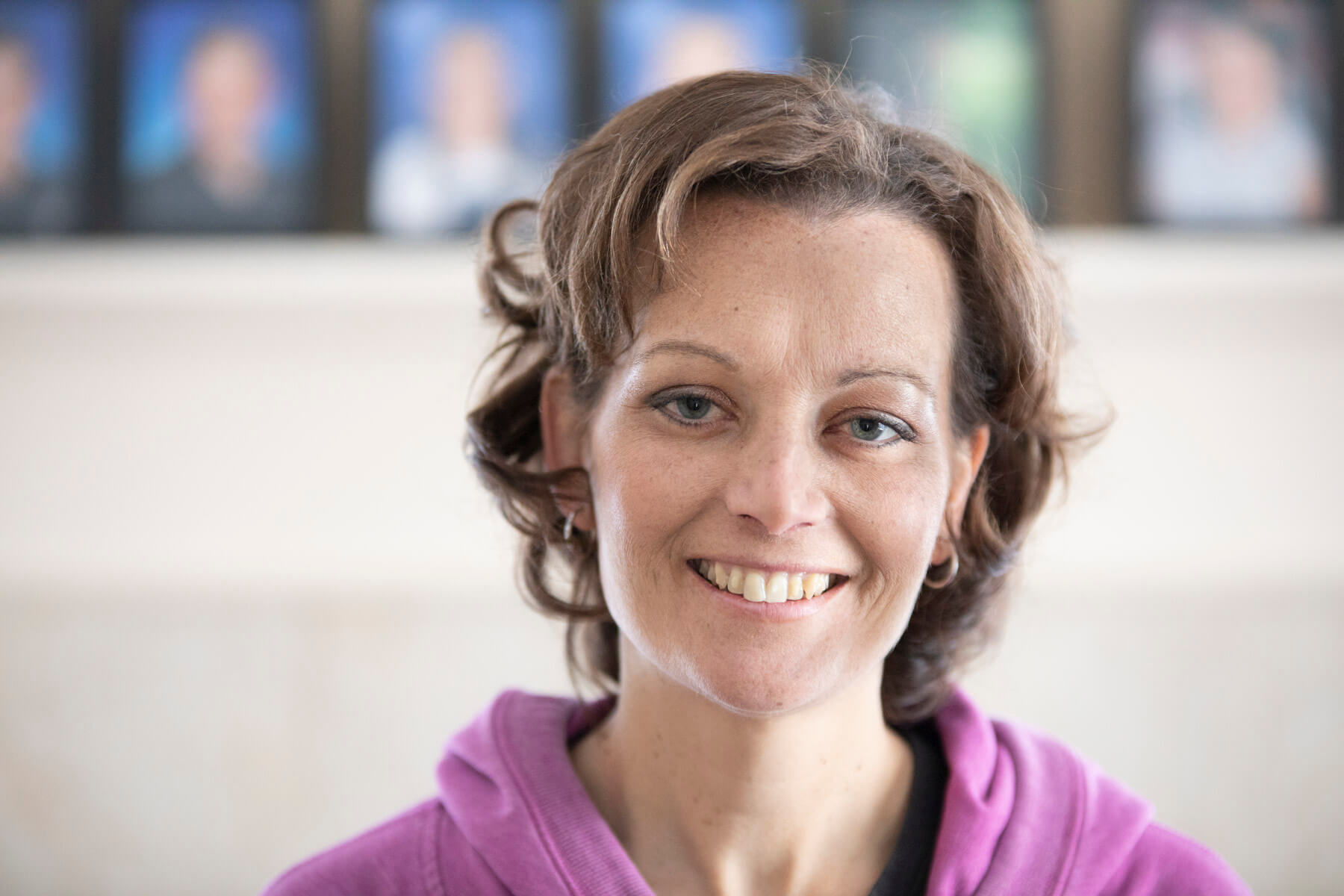 “She is a gem, and her attitude of living life with true meaning is a humbling lesson for all of us,” said Dr. Clemons. “Too many people in society spend too much time moaning about the trivial, as well as things they can’t do anything about. Life is for living, and Jillian encourages people to do that—live!”

Whether it’s thanks to the innovative new treatment she receives or her uber-positive attitude, Jillian has surpassed the original two-year diagnosis by two-and-a-half years.

Dr. Clemons told her, “Whatever you’re doing, keep on doing it—obviously it’s working for you.”

We need your help today to give patients like Jillian more time, more memories, more hope.

Donate
Sign up to receive updates on the transformational care taking place right here at our hospital, inspiring patient stories, and the latest research discoveries impacting healthcare for you, your loved ones, and our community.
This website uses cookies and other tracking tools to offer you a better experience. Disclaimer & Privacy Statement Accept
Privacy & Cookies Policy
Necessary Always Enabled