Navigating a premature birth during COVID-19

When Wardha discovered she was pregnant, she prepared herself for any challenge that might come with giving birth during the COVID-19 pandemic. But she didn’t expect to have a premature baby, weighing just 610 grams, only 25 weeks into her pregnancy. Following an emergency C-section, this young family was cast into a world of unknowns — filled with daily visits to The Ottawa Hospital’s Neonatal Intensive Care Unit (NICU) during a global pandemic. They never lost hope and placed their trust in our experts to give their daughter the best chance at survival.

Up until the day baby Aya was born, Wardha was having a normal, healthy pregnancy. Just starting to feel her baby move in her belly, she relished every moment. So it came as a complete shock when her water broke early one morning — 15 weeks early. As a healthcare worker herself, Wardha knew this was far too early and their baby was in danger.

Wardha’s husband, Omar, called an ambulance and she was rushed to our hospital where a healthcare team was waiting, ready to care for her.

After an ultrasound and several tests, Aya’s heartrate was dropping — she was in distress. An unborn baby is dependent on a steady stream of blood through the umbilical cold to receive oxygen and other nutrients. If blood flow is reduced, abrupt dips in the infant’s heart rate will occur. Over an extended period, this can become harmful for the baby, particularly for an already vulnerable premature infant such as Aya.

“It felt like we built a bond with Dr. Jankov. That really helped us come out of the dark.”

What Wardha didn’t realize at the time was the trust and bond she would develop with Aya’s NICU team as they worked together to care for her. 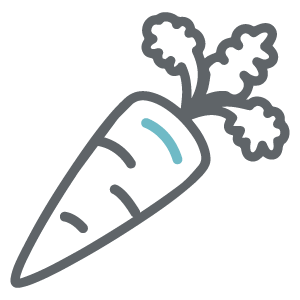 Babies born before 28 weeks and/or who have a weight less than 1000 grams and are about the size of a CARROT.

Caring for a ‘miracle’

The first time Wardha and Omar properly saw their daughter was after she was placed in our NICU. In the midst of wires and tubes, Aya, whose name means miracle, looked so small and fragile. “It all seemed to happen so quickly, I think I was still in shock, but it was so great to finally meet her and spend some time together as a family.” said Wardha.

On that first day, Dr. Robert Jankov, Aya’s primary caregiver, paid Wardha and Omar a visit. He took the time to carefully explain every step of Aya’s care, including each test she would undergo, potential complications that could arise throughout her development, and what they planned to do to mitigate the risk of infection. “It felt like we built a bond with Dr. Jankov,” said Wardha. “That really helped us come out of the dark. He took the time to ensure we understood Aya’s care and treatment plan and what would happen during her stay in the NICU. It was really reassuring.”

Seeing their little miracle in the incubator, it was clear they had a long road ahead of them. And tests would soon prove this to be true.

Aya was born so prematurely that she needed to be hooked up to IV’s and a central line to continue to receive the nutrients she needed to grow. She also required a ventilator to help her breathe. But over time, the oxygen and ventilator that Aya was on to save her life also caused her to have bronchopulmonary dysplasia (BPD), a disorder that causes irritation and inflammation in the lungs, preventing their normal development. It is one of the most common causes of death in premature babies. 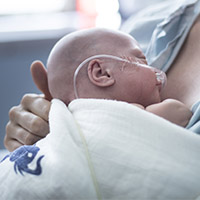 Premature babies often need extra oxygen and mechanical intervention to breathe, but this can damage their lungs, causing a chronic lung disease. A stem cell treatment soon to be tested in clinical trials at The Ottawa Hospital may help heal the lungs of premature babies. Read more.

In Canada, 1,000 babies are diagnosed with BPD every year. Many develop other chronic lung diseases, such as asthma, and require prolonged oxygen and ventilation. Currently, there is no treatment for the disease, but one of our experts, Dr. Bernard Thébaud, is leading a Canada-first clinical trial to test the feasibility and safety of umbilical cord stem cell treatment in premature babies with BPD.

Thanks to the care Aya received, she was able to go home without oxygen or therapies for her lungs.

Although Aya’s chances of survival improved by the day, she still had an upward battle with one health concern after another. A diagnosis that worried Wardha and Omar the most was Aya’s retinopathy of prematurity (ROP), a potentially blinding disease that involves the abnormal development of retinal blood vessels in premature infants. ROP occurs when a premature babies’ retinal blood vessels haven’t finished growing. Aya developed concerning ROP and received injections of medicine in her eyes.

“These babies have a lot of resilience.”

“I remember feeling really overwhelmed and like a failure,” said Wardha. But she felt hopeful Aya was in the care of some of the brightest minds who were determined to go above and beyond to ensure the very best outcome.

Due to advances in treatment, we can care for babies who are born as young as 22 weeks. Many grow up to live healthy lives. To better address the needs of micro-preemies, the Extremely Low Gestational Age (ELGA) multidisciplinary working group was created, comprised of physicians, respiratory therapists, nutritionists, pharmacists, and preemie parents, like Wardha. Together, this group developed a care bundle including vital information on how to best treat extremely preterm babies soon after birth and during their critical first week, to ensure their best chance of survival.

“These babies have a lot of resilience,” explained Dr. Brigitte Lemyre, a physician who leads this highly committed working group. “What’s most important is the partnership with the parents and their presence at the baby’s bedside, because this affects their outcome.”

“The journey was really difficult, but we had a support system and people who care about the well-being of our daughter. It made it easier.”

As a member of the ELGA working group, Wardha was able to provide insight and perspective as a mother of a premature baby. This helped guide and inform our experts on how to improve treatment and care of our tiniest patients. Wardha was able to feel heard and contribute to her daughter’s care in a meaningful way during their time in our NICU.

Aya remained in our care for four long months. Not only did our healthcare team provide lifesaving and compassionate care to Aya, but they also looked after Wardha and Omar. Due to visitor restrictions set in place as a safety precaution during the COVID-19 pandemic, they took turns visiting Aya and were only able to visit together twice per week. This took an emotional toll on the first-time parents. “The journey was really difficult, but we had a support system and people who care about the well-being of our daughter both at home and at the hospital. That made it easier,” said Wardha.

“When we got home, we had NICU withdrawal because Aya’s caregivers became a part of our family.”

Each time they visited Aya, her care team took the time to answer their questions. “No matter how many questions I had or how many times I asked them to show me how to change Aya’s diaper, they always stopped what they were doing and took the time to support me. They are all so busy and yet so patient. I really appreciated that,” said Wardha.

Back home and healthy

Now just seven months old, Aya is home and doing exceptionally well. Although thrilled to finally be discharged after four months in our NICU, leaving our hospital left Wardha and Omar with a feeling they didn’t expect. “When we got home, we had NICU withdrawal because Aya’s caregivers became a part of our family,” said Wardha. Grateful for their holistic care and how they worked together to ensure Aya would not only survive, but thrive, the NICU care team is a part of their daughter’s life story Wardha and Omar won’t soon forget.

The Ottawa Hospital is a leading academic health, research, and learning hospital proudly affiliated with the University of Ottawa.

Donate today to ensure our smallest patients, like Aya, receive the latest treatment and exceptional care when they need it most.
Donate

Teen faces massive brain hemorrhage
Lukas Marshy was only 16 years old when he was rushed to The Ottawa Hospital with a massive brain hemorrhage — the result of a rare condition that developed in his brain. Quick thinking and a highly skilled neurosurgical team saved his life.
Creating Tomorrow, Strengthening Critical Services, Neuro, Patient Care

Rare pheochromocytoma tumour gives young man the battle of his life
Bryde Fresque needed a skilled team to come up with a diagnosis of pheochromocytoma – a rare tumour that left his future uncertain.
Cancer, World-Leading Research, Donors, Patient Care
This website uses cookies and other tracking tools to offer you a better experience. Disclaimer & Privacy Statement Accept
Privacy & Cookies Policy