Excruciating chest pains woke Phyllis Holmes from a deep sleep. A trip to the emergency room revealed a twist in her small intestine. Doctors used an uncommon technique that involved leaving her abdomen clamped open for two days after surgery – it’s the reason Phyllis is alive today.

The first of many miracles

For 18 months Phyllis experienced on-and-off pain in her chest. Some episodes lasted for only a few minutes, while others lasted for several hours. Unable to pinpoint the cause of her pain, Phyllis’s doctor started an elimination process; sending her for various tests, including a visit to the University of Ottawa Heart Institute. When results revealed it wasn’t her heart that was causing such discomfort, doctors ordered a CT scan hoping it would provide some answers.

However, only a few days prior to her scheduled appointment, Phyllis jolted awake in excruciating pain. Lying next to her, concerned, was her husband, Brian Jackson, who insisted they pay a visit to the emergency room. Her pain persisted as they checked in at The Ottawa Hospital’s General Campus. Recognizing the severity of her pain, the admitting staff immediately put her in an examination room.

After several tests, Phyllis underwent a CT scan. The results showed her life was on the line.

As Phyllis recalls her experience, she describes hearing only one thing – they would need to perform emergency surgery immediately. “That was all I heard,” said Phyllis. “We have to do emergency surgery or you may be faced with a life-threatening circumstance.”

What the CT scan revealed was a small twist in her intestine, causing her entire bowel to turn purple, almost black. “Her whole small intestine was dying,” said Phyllis’s surgeon, Dr. Guillaume Martel, “which is not survivable. But we got to her quickly, and that day, things lined up perfectly.”

Traditionally, with a bowel in such a condition, surgeons would have removed the section of the bowel that was compromised. However, in Phyllis’s case, almost her entire bowel was jeopardized. Removing such a large portion of her bowel would have reduced her to being fed through IV nutrition for the rest of her life.

Once Phyllis was in the operating room, doctors were able to more accurately assess the severity of the damage caused to her intestine. Some vitality in her bowel remained— an encouraging sign that there was a chance it could be saved. Rather than remove the intestine, they decided to leave her abdomen clamped open and wait.

For two days Phyllis lay sedated in the intensive care unit, her abdomen left open. Throughout that time, Brian recalls the nurses and doctors were attentive and compassionate, letting him know what was going on every step of the way. “I was always in the loop about what was going on,” said Brian, something that he was grateful for during a particularly emotional and stressful time.

“Leaving a patient open can be a form of damage control,” explained Dr. Martel. This technique relieved a lot of pressure in Phyllis’s abdomen, allowing time to see whether her bowel would survive. However, it can be difficult for a doctor to know if this technique will work for one patient over another. Luckily, in Phyllis’s case, it did.

The wait was over

When Phyllis was brought back to the operating room for her second surgery, Dr. Balaa, the surgeon, told Brian what to expect. It could be a long procedure, where they would remove part of her intestine, and in its place attach a colostomy bag. Brian settled in for a long and stressful wait, unsure of what life might be like once Phyllis’s surgery was complete. But less than an hour later, Dr. Balaa appeared with incredible news.

When they took off the covering, a sheet that protected her abdomen while she lay clamped open, her intestine was healthy and back to normal again. To their amazement, her intestine remained viable and all they needed to do was stitch her back up.

The next morning Phyllis woke to Brian’s warm smile at her bedside. While she was unaware of the incredible turn of events, she was grateful to be alive.

She remained at the hospital for a week after the first surgery. While she recovered, Phyllis recalls receiving exceptional care. “The doctors always had so much time for me when they did their rounds,” said Phyllis. “They were very patient and engaged in my situation, it was heartwarming and wonderful.” Phyllis was so grateful, she wanted to show her appreciation.

That’s when Phyllis heard of the Gratitude Award Program. This program was developed as a thoughtful way for patients to say thank you to the caregivers who go above and beyond to provide extraordinary care, every day. It’s a way for patients, like Phyllis, to recognize caregivers by giving a gift in their honour to The Ottawa Hospital. The caregivers are presented with a Gratitude Award pin and a special message from the patient letting them know the special care given did not go unnoticed.

Honouring Dr. Martel and several others through the Gratitude Award Program was a meaningful way for Phyllis to say thank you. “I wanted to be able to give something in return,” said Phyllis.

Dr. Martel was touched by the gesture. “When you receive a pin from a patient like Phyllis, it’s very gratifying,” explained Dr. Martel. “It’s something you can feel good about receiving.”

Phyllis’s journey at The Ottawa Hospital was far more than an emergency room visit and two surgeries. When asked to reflect on her experience, she tells a story of compassionate care and healing, both physically and mentally. “I felt that even though I was there to heal physically, I was getting psychological support as well,” Phyllis explained. “Everyone would use eye contact, or they’d touch my hand with compassion. It was very personal. I saw the divinity in those people,” explained Phyllis. “I saw it. I experienced it first-hand. And it is healing. That is the healing that takes place when you have those very special encounters. It heals you.”

Today, Phyllis feels incredibly grateful for the care she received at The Ottawa Hospital. “It was second to none,” she said. 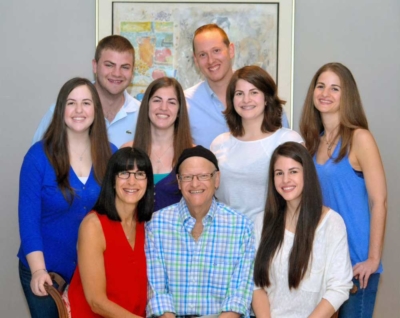 In August 2019, Dr. Guillaume Martel was announced as the first Arnie Vered Family Chair in Hepato-Pancreato-Biliary Research. Dr. Martel is a gifted surgeon at The Ottawa Hospital who has saved and prolonged the lives of countless patients, particularly those with cancer. An international search conducted for this Research Chair found the best candidate right here in Ottawa. This Research Chair provides the opportunity for innovative clinical trials and cutting-edge surgical techniques that will benefit our patients for years to come. This was made possible through the generous support of the Vered Family, alongside other donors.

“When Arnie got sick, he needed to travel to Montreal for treatment. It was so hard for him to be away from home and our six children. We wanted to help make it possible for people to receive treatment right here in Ottawa. This Chair is an important part of his legacy.” – Liz Vered, donor

Honour a physician, nurse, health care team member, or volunteer for the exceptional care you or a loved one has received at our hospital.

Inspiring gratitude
More than a year into a pandemic that has challenged our healthcare workers like never before, Dee Marcoux is once again hoping to inspire the community to join her in honouring healthcare workers. And she is doing it in a unique way.
Donors, Gratitude Award

A meningioma tumour leaves mother facing blindness
In the fall of 2020, Michele Juma noticed the vision in her left eye was becoming cloudy. Fearing blindness, she travelled to The Ottawa Hospital where she received specialized care after learning she had a meningioma tumour – and time was not on her side to save her vision.
Innovation, Neuro, Patient Care
Sign up to receive updates on the transformational care taking place right here at our hospital, inspiring patient stories, and the latest research discoveries impacting healthcare for you, your loved ones, and our community.
This website uses cookies and other tracking tools to offer you a better experience. Disclaimer & Privacy Statement Accept
Privacy & Cookies Policy