Marcie Stevens was one of 13 severely injured patients who arrived at The Ottawa Hospital Trauma Centre after the Westboro bus crash. One year later, after losing both legs, Marcie continues her recovery at the Rehabilitation Centre and she’s grateful for the compassionate care she’s received.

It was a bitter cold, winter day on Friday, January 11, 2019. Marcie Stevens was making her way home to Kanata for the weekend from downtown. The Public Safety employee sat on the second level of a double-decker OC Transpo bus when it crashed into the overhang of the Westboro transit station. It was 3:50 p.m.

Ten minutes away from where the crash occurred, the trauma team at The Ottawa Hospital was alerted, and a Code Orange was called. The Emergency Department began clearing space, and a large number of staff converged including surgeons, nurses, anesthetists, emergency physicians, and support staff. A massive team of about 150 people would await the injured passengers. At 4:28 p.m., the first patient arrived at The Ottawa Hospital’s Civic Campus, home to the only level 1 trauma centre in eastern Ontario. In total, 13 severely injured patients over a two-hour period were rushed to the trauma centre – one of the injured was Marcie Stevens.

The married mother of two recalls being conscious and considerably calm throughout the entire ordeal. Though she was pinned on the top level of the bus and critically injured, she was able to call her husband, Christopher, to tell him she couldn’t pick up their children. She even thought to call work to let them know she wouldn’t be in on Monday and was able to help to calm those around her while emergency crews worked furiously to remove them from the wreckage. Marcie would need that calm composure in the midst of adversity for what awaited her.

“I couldn’t have gotten this far without the incredible people and support from The Ottawa Hospital – from the trauma team to the ICU to the Rehab Centre – it’s incredible. Compassionate is the best word to describe it.” – Marcie Stevens

The trauma team was ready

After arriving at the Emergency Department, Marcie recalls she had lost so much blood and that after her CT scan her blood pressure began to plummet, but the trauma team was ready. “The nurse in the Emergency Department had the O negative blood in her pocket. They immediately started pumping blood back into my system. My blood pressure stabilized, and I was then rolled into the operating room. The only time I passed out was when they put the mask on to put me to sleep.” 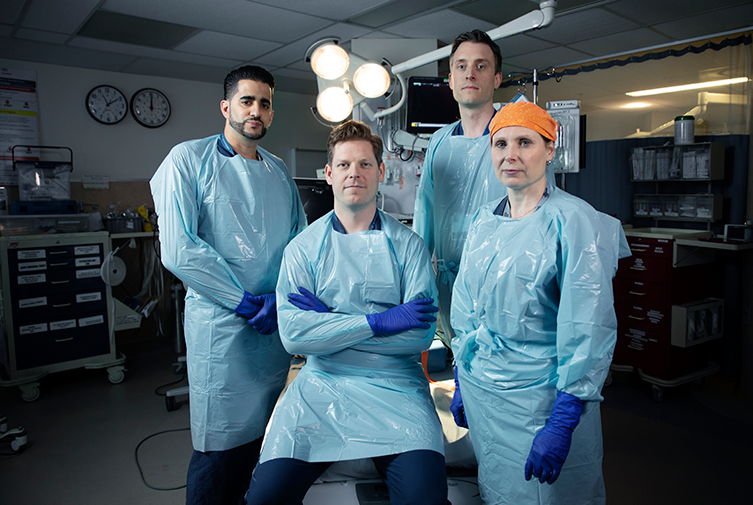 Marcie would wake up on Sunday morning, groggy and swollen. That’s when she learned from her husband that both of her legs had been amputated. “I knew going into the operation that my left leg was gone, because they told me. But they were going to try to save the right leg, but they couldn’t, and on Saturday they had to take it.”

While a completely new world awaited Marcie, her positive attitude never wavered. “You adapt and that’s what I have been doing. This is the way it goes. I couldn’t have gotten this far without the incredible people and support from The Ottawa Hospital – from the trauma team to the ICU to the rehab centre – it’s incredible. Compassionate is the best word to describe it.”

Waking up to a different life

Soon after the bus crash, Dr. Nancy Dudek, Medical Director, Amputee Program at The Ottawa Hospital Rehabilitation Centre, met Marcie at her bedside for the first time. “I had regular visits with Marcie when she was in the trauma unit to determine when she would be medically ready to come to the Rehab Centre.” The Ottawa Hospital Rehabilitation Centre specializes in the physical rehabilitation of those who have experienced a disabling physical illness or injury. It serves the residents of eastern Ontario.

Dr. Dudek is quick to point out though that Marcie’s rehab started soon after she was admitted to the hospital. “We started rehabilitation plans when she was still in the Trauma Unit. She was a very avid participant of early rehab.”

Marcie’s road to a new way of living life began with her multi-disciplinary care team helping to get her wounds healed. That would lead to teaching her how to move independently once again.

By the end of February, Marcie moved to The Ottawa Hospital’s Rehabilitation Centre. She says the staff were incredible from the moment she arrived. “I was in a room with three other women. They put the two who fell asleep early on one side and me and an older patient – the night owls – on the other.”

It was during rehabilitation that Marcie learned how to transfer from the bed to her wheelchair without a lift. She learned how to cook in a kitchen that is not accessible, to prepare for her return home, and she’s learning how to drive with hand controls. 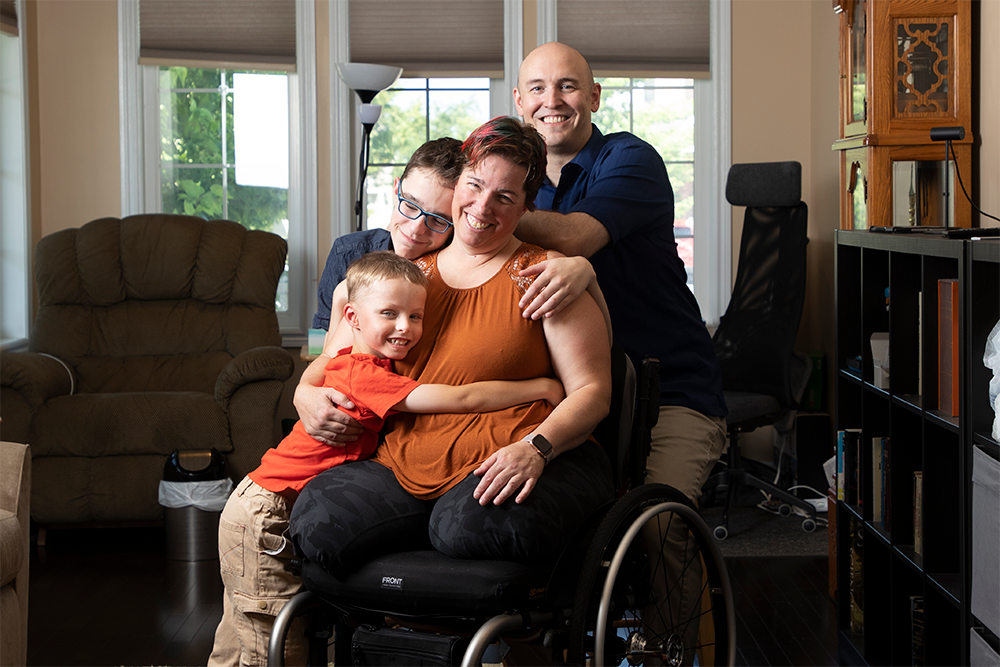 Marcie Stevens and her family.

Dr. Dudek explains there’s a great deal to cover in rehab. “We teach wheelchair skills, including what the right wheelchair is for the patient. We also had to work on strengthening, including core strengthening. Then, we talked about what would be the immediate needs to get her home to her family, including her five and 12-year-old boys.”

Marcie went home on Friday, April 12, 2019. Three months after arriving at the hospital. When Marcie reflects on her feelings as she was leaving the rehab centre, she takes a moment and then replies, “It was a giddy day. It’s not like I didn’t like the Rehab Centre,” she quickly qualifies her response smiling at Dr. Dudek, “but it was good to be home with the kids.”

Of course, going home didn’t mean Marcie’s rehabilitation was over, but it was a major advancement in her recovery – a recovery that she faced head on with a resilience that never wavered. Dr. Dudek says it’s been inspiring to watch Marcie over the last year. “She is an incredibly positive person. That has been consistent. It’s something that was there right from our first meeting and it hasn’t really faded. She has a ton of energy and other people really gravitate towards her. She’s very popular around here.”

“Rehab is great. It is the jewel of the hospital that nobody knows about. They are sort of hidden away here. They have to deal with so many types of injuries and states of mind. Not everyone at the centre is accepting of what happened to them,” admits Marcie.

As Marcie recounts all that she’s been through in the past year, she still jokes and laughs. When Dr. Dudek is asked if she thinks this incredible attitude helped with Marcie’s recovery, the answer comes fast. “One hundred percent. She has made significant changes and implemented new things to her life. It’s very impressive to see. We can show people the way, but we can’t do it for them.”

Today, Marcie and her family are moving forward. A new home is necessary – one that is fully accessible, and Marcie talks about getting back to work someday. 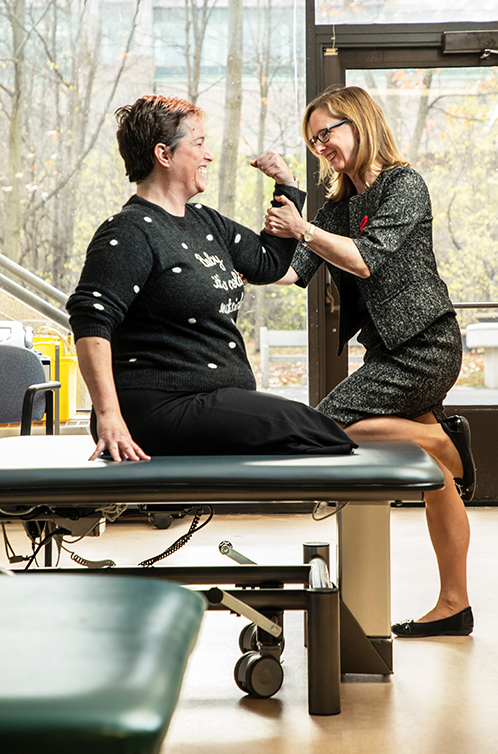 She misses her colleagues, but she knows that day will come with time. “I’m a very positive person and it will take time to get used to the changes in my life, to adjust to having no legs. It’s difficult. I’ll get there.”

For now, she will continue with her regular rehab. Eventually she will only need annual visits. For now, her weeks are filled with trips to the gym and the pool, all to get her stronger for the new world she faces. Despite the challenges, she embraces it all with confidence, a smile, and you could say a bit of attitude as she wheels away wearing her black leather jacket, sunglasses, and a streak of pink in her hair.

Your support will provide crucial funding
to improve the care of patients like Marcie.

When Ashley Ruelland met her instant
In March 2015, Ashley Ruelland was driving to a bachelorette party in Mont Tremblant when another car crossed the centre line and hit her head on. After months in the Intensive Care Unit, trauma unit and rehab, her road to recovery continues to this day.
Patient Care, Trauma
Sign up to receive updates on the transformational care taking place right here at our hospital, inspiring patient stories, and the latest research discoveries impacting healthcare for you, your loved ones, and our community.
This website uses cookies and other tracking tools to offer you a better experience. Disclaimer & Privacy Statement Accept
Privacy & Cookies Policy
Necessary Always Enabled